While the myth of the absent black father has been debunked again and again, it doesn’t negate the reality that some dads could be doing much better by their daughters.

In 2003, recording artist John Mayer won the Grammy Award for Song of the Year for his song “Daughters.”  In it, Mayer paints a somber picture of girls with father issues navigating relationships as adults. He warns, “on behalf of every man, looking out for every girl, you are the God and weight of her world… so fathers, be good to your daughters.”  At the time, there were few things that annoyed me more than John Mayer (he was EVERYWHERE) but it was impossible to deny the truth in the song.  This year, Kelly Clarkson brought millions of people (including herself… and me) to tears when singing an acoustic version of her song, “Piece by Piece,” an emotional song reflecting on her disappointment with her own father.

I was reminded of these songs last night when I caught the tail end of Iyanla Vanzant’s reality show, Fix My Life.  The show focused on rehabilitating the so-called “Angry Black Woman.”  While the episode was everything you would expect, one theme rang true, so many of the women who were featured had issues that began with disappointment  in their fathers.

While the myth of the absent black father has been debunked again and again, it doesn’t negate the reality that some dads could be doing much better by their daughters.  My parents divorced when I was six and while my father was always present, it was impossible to ignore the void his physical absence left me with.  Luckily, I had two brothers, ten and twelve years older than me, who stepped up in ways he could not.  As I grew into a young lady and chose my spouse, here are some of things being loved by them taught me I needed.

One of the more priceless lessons my eldest brother taught me was to recognize the humanity in the adults in my life.  It may seem like a simple lesson but when you’re a child, you tend to see your parents and other adults in your life as superhuman.  I think thats why it is so difficult to recover from childhood disappointment.  My brother was careful to dismantle the pedestal I put the adults in my life on… even him.  That way when they disappointed me, it didn’t crush me.

One of the most important things you can do for your daughter is be honest.  Don’t attempt to be superhuman by hiding your flaws or masking your vulnerability.  Admit when you made a mistake.  Admit when you lied. Tell her the truth even if it may hurt her.  Your honesty will help your daughter see you as a whole person.  That way when you disappoint her, and you will, she will recognize your humanity and not just see you as a liar.

My kids are constantly begging for things.  “Mommy, can we go here…” “Mommy, can we do this…”  Sometimes its easier to say, “Later” than “No” even if I know that saying “No” is inevitable.  The thing is, if you are constantly promising one thing and doing another, it won’t be long before your words means nothing.

In the words of Melania Trump… or First Lady Michelle Obama, “Your word is your bond.” If you say your going to be there, be there. If you say you are going to do something, do it.  If you aren’t sure you will be able to do either of those things, be honest about it.  Nothing stings worst to a young woman than disappointment.  You want your daughter to be able to rely on you and expect the same from the man she may choose to be with.

3. Tell her she is beautiful.

I had my fair share of awkward phases during adolescence.  I had a gangly rail-thin phase, a pimply phase, and a phase where my belly always poked out from under my shirt, no matter how hard I tried to suck it in.  Like most girls, it wasn’t always easy feeling secure in my body.  Some days, it felt like I would never learn to love myself, let alone find someone to love me.

Young girls are fragile. Especially girls of color.  Growing up, we are hard pressed to find images of ourself where we are symbols of beauty or the object of someone’s affection.  As a father, you have a unique ability to make your daughter feel beautiful.  You are your daughters first representative of the opposite sex.  Tell her you enjoy her smile, that the new color she painted her toes is cute, that she looks even more beautiful after browning in the sun. Feeling beautiful in your Dad’s eyes, even if just his, can make all the difference in how you cope with the many phases of adolescent insecurity. 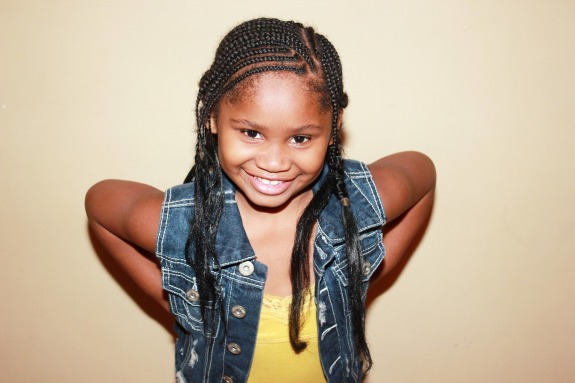 This is pretty self explanatory, though, I know it may be controversial.  However, as a society that condemns all forms of domestic violence, I think it’s important to teach our daughters early that a man should never lay his hands on her in anger.  By saying it’s okay for fathers to hit their daughters in certain circumstances, I think we dangerously blur the line about whether it’s okay for a man to hit a woman.  If you tell your daughter no man is allowed to put his hands on her, show her you mean it by doing the same.

5. Treat other women the way you want to see men treat her.  Especially her mother.

Whether you are married, divorced or single, your daughter will see the way you treat the women in your life as an indication of how she should expect men to treat her.  If you are constantly disrespecting women, bad-mouthing her mother or womanizing, if will be difficult for her to build a foundation of trust with a man in the future because she will constantly worry he will turn into you; or worse, she will expect him to.  It’s hard enough navigating adulthood without entering it with trust issues.

If you can’t curb your womanizing ways, avoid exposing your daughter to your behavior.  Don’t bring multiple women around her.  Where possible, avoid bad-mouthing her mother in her presence.  Save your complaints for another adult.  Your daughter (or any child) is never an appropriate audience for this kind of behavior.

My eldest brother used to pick me up from elementary school so we could ride the city bus home from school.  It was in the age of Kangols and boomboxes, and he would insist on sitting in the back of the bus with music blasting. Despite his efforts to be cool, little me didn’t get the memo. I would dance and act silly until it broke his facade and he was laughing right along with me.  I was too young to remember every detail of those moments, but what I do remember is how good it felt that my company was enjoyed.  As I grew older, I was confident that other people would enjoy my company too.  Even if I was a little weird.

With your own daughter, laugh at her jokes. Find joy in the things she does.  If your time with her is limited, find things to do that keep you two engaged. Don’t just plop her in front of a television or a movie and babysit her, spend actual time with her.  Find things to do together that allow you the opportunity to get to know who she is.  That will give her more confidence that she is someone worth getting to know.

My nineties kids will likely remember that old Brownstone song, “If You Love Me.”  The chorus begins, “If you love me, say it.” While the song is about romantic love, that line always stuck with me. I think it stuck with me because saying I love you has never been easy for me to say unless I mean it.  My husband, then-boyfriend, was the first to say I love you.  To this day, we laugh at the memory because initially, I didn’t say it back, and his response was, “You know you love me too.”  While he was probably right, the words meant a lot to me.  I didn’t want to say it until I was sure I meant it.  Today, he couldn’t stop me from saying it if he tried.

Just as much as saying the words matter, hearing them matter too.  While arguably, showing you love someone is better, you can do both.  Tell your daughter you love her so she never has a reason to question whether you do.  If you can’t muster saying the words, write them.  Those three words are too important to be left untold.

No matter how hard things get with her mother or how difficult her teenage years are on you, never walk away from your daughter.  Fight to stay present and in her life.  Even if the complexities of teen angst stop her from wanting to talk to you or make her hard to be around, never stop trying.  Love her unconditionally.  Show her she is worthy of unconditional love.

2 thoughts on “Be Good to Your Daughters”